Only You Can Stop You

I believe my greatest accomplishment is not giving up. Faith and fear cannot exist together. You have to pick one or the other. No one can stop you, only you can stop you. 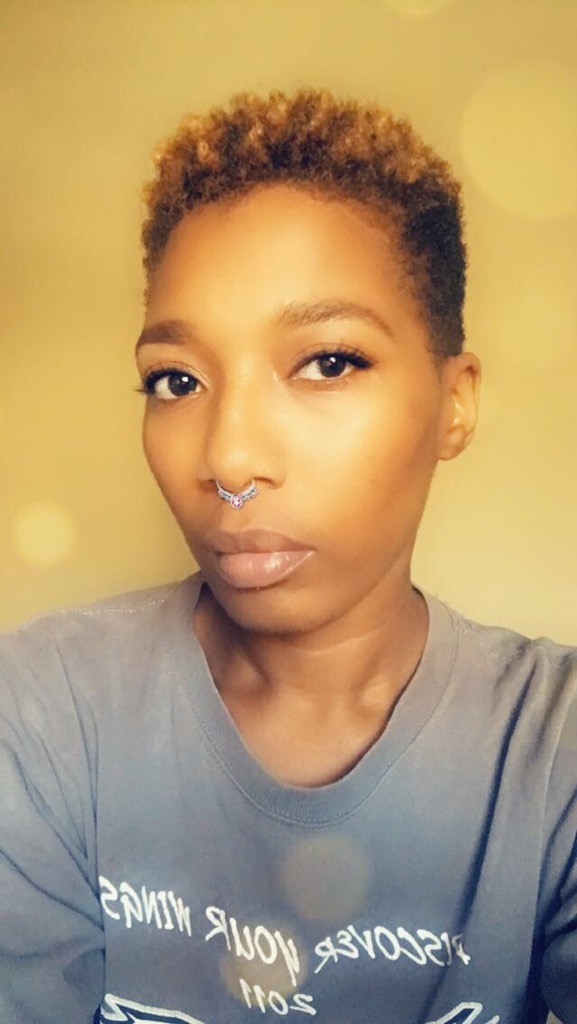 Concrete Jungle Where Dreams Are Made Of

I'm a New York City native, born and raised in Queens, 41, a mother of two daughters, one 21, one two – which is pretty much where my financial trouble started.

I didn't think about what my dream job would be. For some reason I always wanted to just go to college. Like that was a dream. I literally wanted to skip high school and just go straight to college because I didn't understand the point. My parents didn't go to college. “Once I get to college, my whole life will be figured out.” That's what I thought.

I was actually a really good student, but I realized in order to fit in, you had to be "school wasn't cool.” So I left hanging out with really good friends, and friends that were about education and started hanging out with the bad kids. And that's where everything went downhill for me.

I ended up dropping out of high school and got my GED because I couldn't deal with it. I did all the work. I found the program that I wanted to go to. I knew what I needed to get into the program, and I literally finished everything within six months. So I finished my GED around the same time I would have been graduating.

Then I wanted to go to college. So I go to these different colleges and get these applications. All I needed was someone to help me fill them out. And no one in my family could help me fill out the college forms. And then I filled them out to the best of my knowledge. I did it wrong. I completely lost all of my enthusiasm with going to school.

I ended up getting involved in a relationship with a person 13 years older. We ended up having a child together --- my oldest daughter.

I was 20. I thought we were going to get married, but that was not what he wanted. So here I am, a single mother at 20. But I said: ‘Well, now is a good time as any to go back to school. I'm not just going to raise my child on a high school diploma.’ I ended up leaving New York and moving to North Carolina because I had family there willing to give me a place to stay and help me get on my feet.

I left when my daughter was a month old and got enrolled in school there. But I didn't do the best in my first semester. Then I sat out that semester, then went back. It's kind of difficult being a single mom, working two jobs, going to school. So it took longer than I wanted it to take.

I did telemarketing. I did customer service work. I worked at retail, officework, just everything you could think of. But I couldn't stay at one particular job because I didn't really have that much help. It was hard to maintain employment because I'm a single parent so if my child is sick, I have to stay home. Whoever I had scheduled to pick her up decides: "Oh I can't do it. Then I have to do it.” So I had to quit a lot of jobs. I was fired from a lot of places because my child comes first. I finally got my own apartment, my own car, so now I really want to maintain those things. School kind of gets put on the backburner for a little while. Ultimately, it took me eight years to get my associate’s.

The Numbers Weren’t Adding Up

Now I'm $60,000 in debt for my associate's and bachelor's degrees because I ended up getting my bachelor's as well.

I initially started acquiring debt with my first child. Because I didn't have any child support, I had to take out student loans. I ended up applying for store credit cards, like Target or Old Navy because I had to buy her clothes. That started some of the financial issues. Living in New York was so expensive, and it's hard to find a place that you can afford. I couldn't find a job willing to pay my worth, so I'm literally living from paycheck to pay check. After every paycheck, I might have $10 left. And that's every two weeks.

So I'm struggling and I don't know what else to do. I'm just living off of credit, just hoping that I could survive at some point. And hoping that when income tax [rebate time] comes, I could pay off all the stuff that I owe. I did that for years, because I don't like being in debt. I'm never the person to be like: “Oh, the hell with it, I'm not going to pay that.” I've never been that person. So every income tax, I paid everything off that I owed. To the point I didn't have $20 left because I'm paying off everything. I did that for years.

I think a lot of women do this to themselves….They have a plan for their life and if it doesn't go exactly the way they planned they feel like they failed in some kind of way. And so I was like, I don't have the right to celebrate this moment.

I just hung up my associate's degree last week, now looking at it as an accomplishment. I had to get out of my own way. I think I'm doing myself a disservice by not being in the moment and enjoying what I have accomplished, because I accomplished a lot.

I could not get a job with my degree. I was looking into social work or case management. Every place that I went to was like: "Oh great, you have a bachelor's, but sorry you need your master’s." And I refused to go back to school to get my master's. I had just got my bachelor's. I was burnt out. I didn't have any more energy to get it.

I came up with life coaching. I came up with that because that's really what I've been doing my whole life. I just didn't know it. And if you were to ask friends and family, they all say that I have been doing my whole life. I just finished in November, a certification course. I am officially a certified Life Balance coach. I have one. I'm also employed at the Parker Jewish Institute, a non-profit organization that helps those dealing with dementia and helps their families, working in the office, more like a project assistant right now.

Time for a Fresh Start

What made me file for bankruptcy was I owed a credit card $6,000. They were trying to garnish my wages for it. Literally, I couldn't afford it. If I could afford it, no problem, take it out of my wages because that’s less for me to think about. It's gone I don't see it, take it. But I literally couldn't afford it. They were trying to take out $600 or something out of my check, and I was only getting an $800 check. How am I supposed to pay for food? How am I supposed to pay my rent? I can't afford that. That's when I started looking to file for bankruptcy. Prior to that I didn't even think about it.

A cousin of mine filed for bankruptcy because her ID was stolen. So someone bought a house in her name and the house went into foreclosure. I spoke to her about it. I didn't think I would qualify because I didn’t think I was that much in debt.

I was definitely terrified. I had to do my research on it because I know chapter 7 and chapter 13 are two different things, but I didn't know what that meant, so I had to research that.

After talking to my cousin and finding out that my aunt filed for bankruptcy too, and I had two people that I can talk to about it, it was a lot less frightening. Once I did more research and I realized that that bankruptcy was pretty much put in place for people like me. For reasons beyond their control, this is the situation they're in, but everyone deserves to be able to start over and start fresh. And once I learned that that's what it was, it was no longer a big stigma attached to it for me. Yes I can start over, there's a start over button, hell yeah let me press it because I need that. That just changed everything for me.

Everyone was patient with me and very nice and that helped the process a great deal because it's a scary process. You already feel like a screw-up because you have to file a bankruptcy. It helps to have someone there walking you through the steps and answering your questions as they come along. I don’t understand any of that legal jargon. It's very hard to navigate if you don't understand that language. So you guys helped a great deal when it came to that because I was clueless.

I recently got a credit report just because I wanted to see what my credit score was. And I was like, “Oh, it's official.” I'm starting over. But I feel great about it -- definitely a chance to start over. Now I feel like I can buy a house in the future. I can definitely start over and accomplish the things I wanted to accomplish.

Do your research because everyone's case is different. If you feel like declaring bankruptcy is the best route for you, go for it. And go for it with Upsolve because they will walk a person through it step by step, and take the fear out of it. If they don’t have the answer they say ‘I'm not sure about that, let me find that out and I'll get back to you.’ And that goes a long way.

You Live and You Learn

To anyone in this situation I’d say: “Don't be so hard on yourself. You learn through mistakes. Do not live beyond your means because that is a guaranteed set-up for failure. But don’t be so hard on yourself if you get in to some kind of trouble with debt because that happens. I don’t think there's one person walking on this Earth who hasn't had that experience with owing something and not being sure how you're going to pay for it or you're struggling to pay it.

I believe my greatest accomplishment is not giving up. Faith and fear cannot exist together. You have to pick one or the other. No one can stop you, only you can stop you.