On December 9, 2020 Senator Elizabeth Warren and House Judiciary Committee Chairman Jerrold Nadler introduced the Consumer Bankruptcy Reform Act of 2020 in both the House and the Senate.

The Act, CBRA for short, would represent the most significant overhaul of the consumer specific provisions in the Bankruptcy Code since the Bankruptcy Abuse Prevention and Consumer Protection Act of 2005.

The Bankruptcy Abuse Prevention and Consumer Protection Act (“BAPCPA”) went into effect on October 17, 2005. Despite having the phrase “consumer protection” in its name, it made it more difficult for American consumers to get bankruptcy relief. It’s what gave us the means test, the credit counseling requirement, and the never-not-confusing reaffirmation process.

For better or worse, I wasn’t practicing bankruptcy law in 2005. I was in law school, blissfully unaware of what was happening in law offices nationwide.

What was going on, you ask?

A massive run on the bankruptcy courts all across the nation. This chart from the Consumer Financial Protection Bureau’s Quarterly Consumer Trends Report[1] illustrates this perfectly. 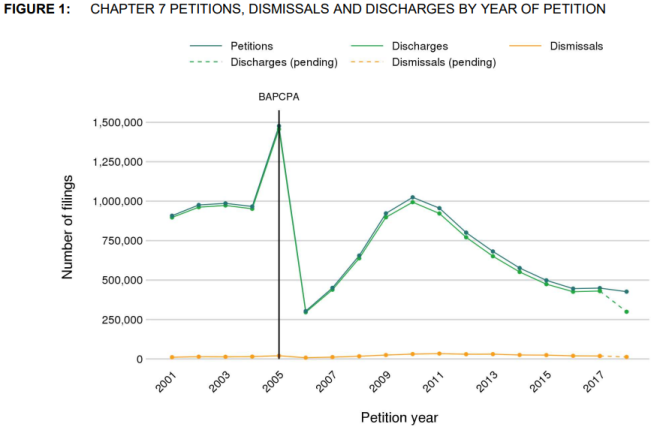 Folks were worried how the means test - a complicated analysis even 15 years later - would impact their ability to get bankruptcy relief. Never mind the fact that bankruptcy was about to become much more expensive in terms of attorney fees for debtors.

CBRA, on the other hand, swings hard the other way. Eliminating many of the hurdles featured  in BAPCPA and prior versions of the Code, reducing the burden on consumers - and ostensibly, their lawyers. The chances of it passing during this lame duck Congress are… well… nil.

But, it sure does represent an excellent starting point for negotiations.

With that in mind, and a real possibility of consumer bankruptcy reform on the horizon, we’ll be publishing a series of blog posts discussing how CBRA would change things and maybe even level the playing field a bit for consumers. So, stay tuned and if there’s anything in CBRA you want me to write about, let me know on Twitter or Facebook!

Also in this series: