The proceeds of a foreclosure sale don't always cover the total balance that a homeowner owes their lenders. When this occurs, the remainder owed is referred to as a deficiency balance. State law dictates when and how a lender may hold a borrower responsible for a deficiency balance. Borrowers may proactively work out a repayment arrangement with their lenders, they may seek to have the balance forgiven via bankruptcy, or they may be held responsible for repayment of the balance via a deficiency judgment.

Foreclosure hurts homeowners. If your home is foreclosed on, the lender will sell it and you’ll have to find a new place to live. If the sale proceeds don’t cover what you owed on your mortgage, the lender may go after you for the difference. This is called a deficiency. This article discusses why creditors sue for deficiencies after a mortgage foreclosure along with how to use state and federal laws to prevent having to pay this extra money.

What Is a Deficiency Balance?

If your foreclosed home sells for less than what's needed to pay off the mortgage and the costs of the mortgage foreclosure, you have a deficiency balance. The calculation is pretty simple: 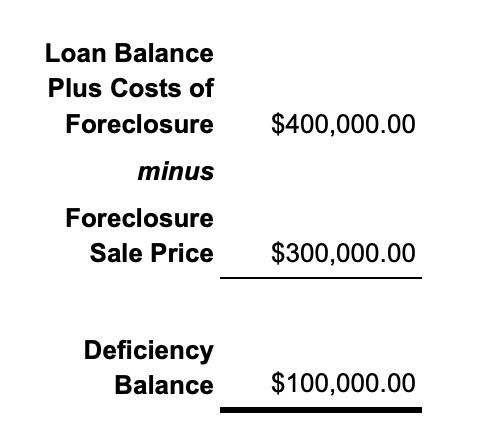 The mortgage lender may choose to sue you to get a judgment to collect this deficiency balance. Until the foreclosure crisis of 2008-2010, it was rare for lenders to sue for the deficiency balance because the prices of real property were increasing. This changed when real estate values fell.

How Do Creditors Collect Deficiency Judgments?

If there's a deficiency balance, this is called an unsecured debt since the collateral isn’t there to back it up anymore. The mortgage is gone, but the promissory note remains. Secured debts and unsecured debts are treated a little differently, which is why this distinction matters. For instance, unsecured debts can be discharged in bankruptcy.

If the lender wins a deficiency judgment against you, it can collect by garnishing your wages, levying your bank accounts, and/or seizing your assets. The lender may also place a lien on your property. A judgment lien is a special type of secured debt that can attach to all your property or real estate. If there's non-exempt equity in your property for the lien to attach to your deficiency debt will become secured again. This will matter if you file bankruptcy, which we’ll discuss later.

Misa
★★★★★ 6 months ago
It was very easy. They guided me through everything.
Read more Google reviews ⇾

Charles Sullivan
★★★★★ 6 months ago
I am very pleased with the services,and guidence that Upsolve give me
Read more Google reviews ⇾

Also, even if the lender can sue you, they may choose not to because lawsuits are expensive and time-consuming. If your lender doesn’t think you have a way to pay the judgment, they may not want to pursue the deficiency judgment. Also if the balance isn’t very high, it may not be worth suing.

State Laws Often Limit How Much a Deficiency Judgment Can Be 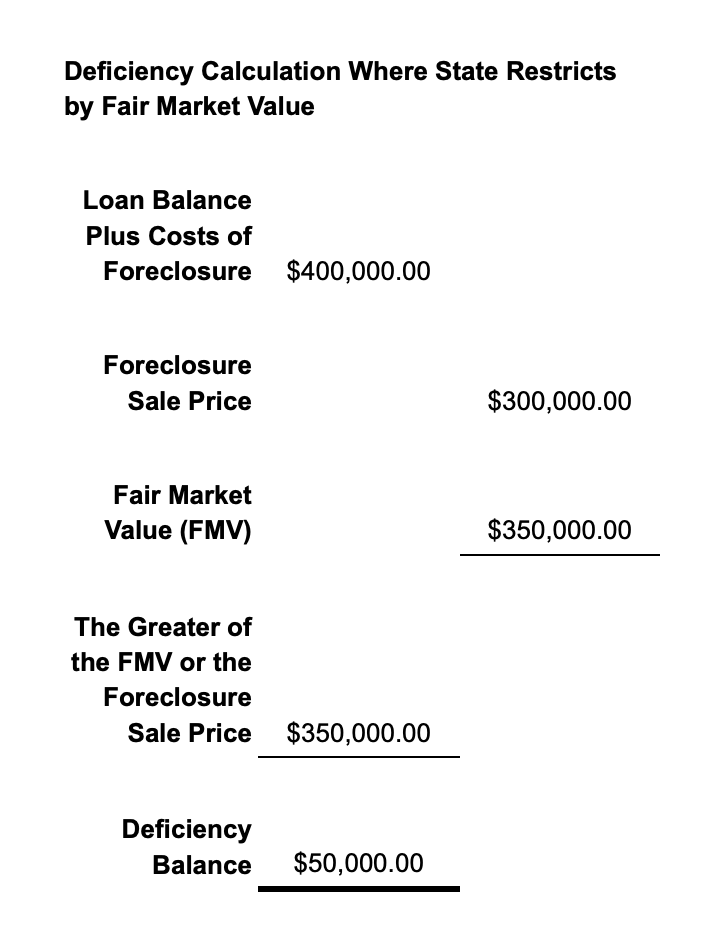 How To Defend Yourself Against a Deficiency Claim

Both of these also require the lender’s permission because they may result in a deficiency. But the lender may agree to them if they believe they’ll be better off doing this rather than foreclosing since foreclosures can be extremely expensive. When you make an agreement with the lender to do either of these you can ask them to forgive the deficiency balance or reduce it. If they agree, get it in writing. If you have to pay something, you may be able to work out an installment payment agreement.

Bankruptcy as a Defense to a Deficiency Lawsuit

You can also get the deficiency balance discharged or eliminated by filing bankruptcy. This works a little differently in Chapter 7 versus Chapter 13 bankruptcies and based on whether you have any non-exempt equity the lender could attach a lien to.

Chapter 7 bankruptcies help eliminate unsecured debts. In most Chapter 7 bankruptcy cases, deficiency judgments are treated as unsecured debt, just like a credit card debt or medical bill. This means the deficiency can be discharged and the lender can’t pursue you for the debt anymore. This is true in most Chapter 7 cases because most filers don’t have any non-exempt equity. Less commonly, the debt can become secured debt after the deficiency judgment is issued. You’ll still be able to eliminate this debt in Chapter 7 to the extent that you don’t have non-exempt equity.

Things get a little more complicated if you have non-exempt equity. In this case, you may want to file Chapter 13 bankruptcy. Unless the lender places a lien on your other assets, the deficiency judgment will be an unsecured debt, dischargeable following your 3-5 year repayment plan. The lender won’t likely receive much through your repayment plan, and once it’s over, the debt is gone.

Working Out a Payment Plan With Your Lender

If you can't defend a deficiency lawsuit, it's time to settle. You’ll want to settle for an amount you can afford to pay because not paying a judgment can damage your credit score. Having a bad credit score means you'll pay more for other loans.

It’s useful to know what you would have to pay if you were to file bankruptcy. If you know you wouldn’t have to pay anything if you filed bankruptcy, you'll have a very strong hand negotiating a very low monthly payment. After all, if they don’t agree, you can file a bankruptcy case, and they’ll miss out on collecting any money at all. If you know you'll have to pay $400 per month in a Chapter 13 bankruptcy, you wouldn't want to agree to pay much more than $400 per month in an installment agreement with the judgment creditor.

Mortgage companies usually don't sue borrowers for a deficiency after a foreclosure. If they do, understanding your state’s laws can help you stop the mortgage company from suing for a deficiency balance or minimize what you’ll owe. You may only owe the difference between the sale price and your home’s fair market value, rather than what it sold for at the foreclosure sale. You may be able to eliminate the deficiency if the statute of limitations to sue you has passed or if the mortgage company robo-signed documents.

John Coble has practiced as both a CPA and an Attorney. John's legal specialties were tax law and bankruptcy law. Before starting his own firm, John worked for law offices, accounting firms, and one of America's largest banks. John handled almost 1,500 bankruptcy cases in the eig... read more about Attorney John Coble